Comments Off on Fall teaching

This semester, I am teaching a small seminar class for undergraduates on economic development.

The goal of the class is to write a research paper, and the syllabus is here. If you would like to follow along with the course, the webpage is here.

Comments Off on Sammy, the runaway crayfish

Something a bit different: I unexpectedly came into the role of caretaker for a crayfish who had escaped from a San Francisco street food festival.

I’d been invited to the fair, and while walking around we came across a crayfish, almost the length of a hand, on the road. At first, we thought he was a wild crayfish, and the immediate concern was that with all the people milling about, he would be stepped on. So I set my bag down on the ground and he wandered in. The plan was to get him off the road, find his natural habitat and release him.

But then we saw the sign advertizing cooked crayfish several yards away. The little guy must have been an escapee from one of the food trucks, where he had been about to be killed and eaten.

Googling, it turned out that it’s illegal to release this kind of crayfish outside — he belongs to the highly invasive P. clarkii species. Not only that, but having been raised for food all his life, I was doubtful he would know what to do in the wild.

So he’s staying over, christened Sammy. I didn’t know the first thing about taking care of crayfish, but I know a lot more about them now, and I think they are underrated. When I first picked him up, I panickedly called the animal advocacy group Direct Action Everywhere, which I knew had a large local chapter, asking for advice. They kindly passed the message on to 200 local animal advocates, who stepped forward in an amazing way with tips and tank offers. Here’s a picture of Sammy in his new digs: 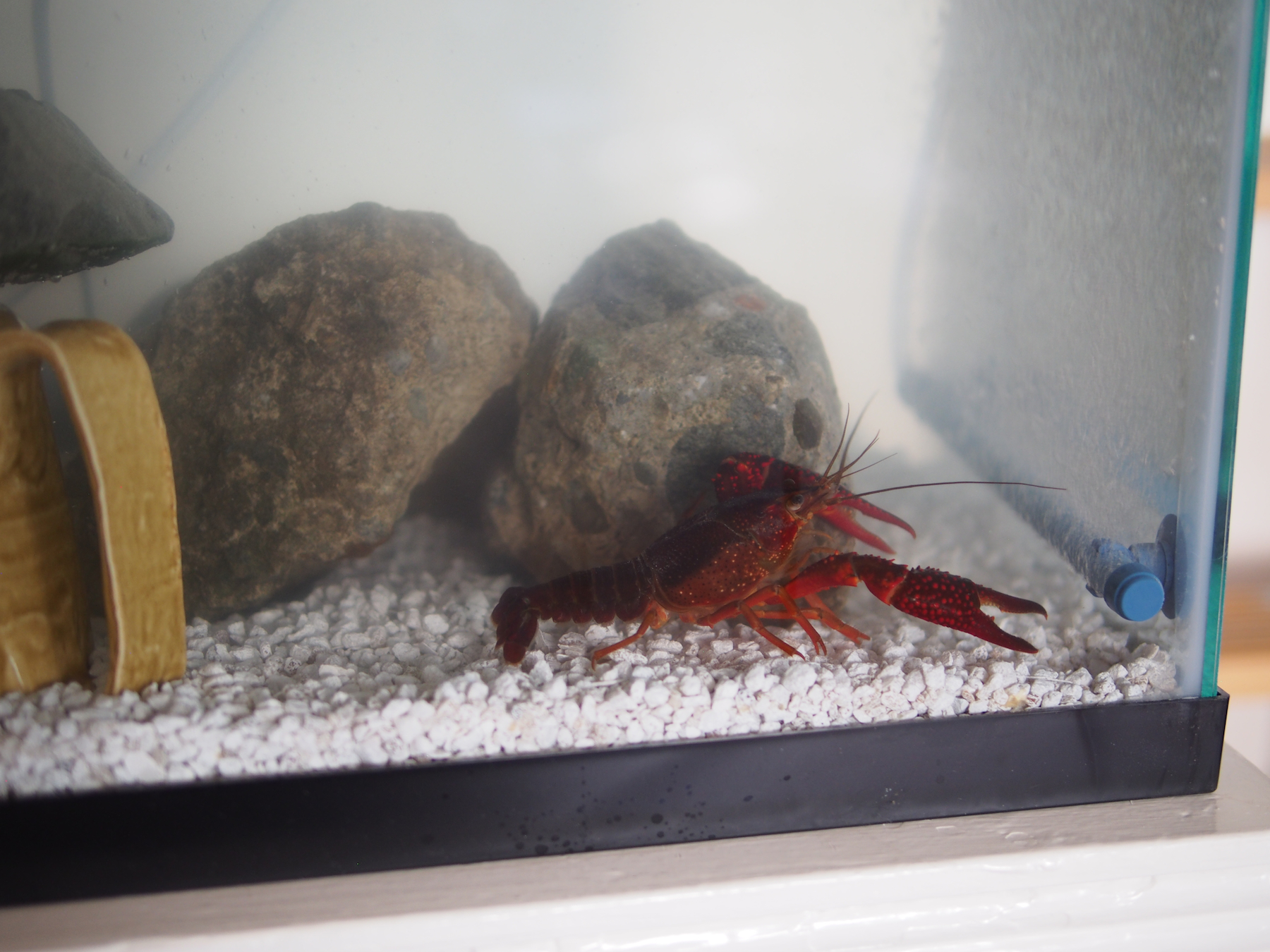 Some things I’ve learned about crayfish:

– There’s increasing evidence that crustaceans feel pain. This was heartening for me to hear, because I remember when I was in high school, the sentience line was drawn at fish — at the time, people argued whether or not fish could feel pain and largely assumed crustaceans didn’t. But it appeared to me then that the line was constantly being pushed back to encompass more and more species, and here was an example of that in action.

– Sammy, like most crayfish, likes to hide in his cup or between or under rocks. He will even scoot about his tank pulling his cup along with him, like a snail. He also hordes food. He eats algae wafers, frozen peas and carrots. We try to keep his tank in the dark, since he prefers that, but if disturbed, he’ll take a defensive posture over his food stash, a claw cocked and at the ready.

– Crayfish can get stressed out. It’s obvious when he’s unhappy (apart from the rescue day, he doesn’t like it whenever we clean his tank). I’ve read that there’s evidence that crayfish respond to some of the same anti-anxiety drugs as humans.

– He really likes to climb. He will climb everything, including trying to climb up the water filter.

All in all, I really like our visitor. I can’t stand thinking what his fellow crayfish went through and the stresses they must have faced being farmed and brought to the market (among other things, crayfish are solitary creatures and will fight when in close quarters with one another, so a crayfish pile seems inhumane). I also have a more immediate response to crustaceans sold in stores, such as shrimp.

Comments Off on Economics and Effective Altruism

In my last post, I wrote that effective altruism does not, in and of itself, imply any particular approach (e.g. political campaigning, donating to charity, etc.). Effective altruists are perhaps most often criticized for supporting charities, but a straw poll on the Effective Altruism Facebook group (undoubtedly a selected sample) showed even more people were in favour of “systemic” change focused on “creating incremental improvements to society’s political, economic, legal institutions and cultural norms.” Economists have done studies relating to both these approaches, with varying degrees of success, and I feel should engage more with the effective altruism community to share what they’ve learned.

I will actually be speaking at the Effective Altruism Global summit in SF this weekend, sharing my work on how much we can generalize from impact evaluations. If any economists would be interested in speaking at EA Global next year, let me know.

Will MacAskill’s book on effective altruism, reviewed over at Marginal Revolution, is coming out today. It’s remarkable how rapidly the label has spread.

In defense of effective altruism

I think most people are criticizing the things the movement has focused on and how effective altruists have gone about it, and a lot of that criticism is valid — but I don’t think these approaches or charities are implied by effective altruism. If you think that the best approach is not to give to charity but for people to agitate politically, for example, you can imagine an effective altruist supporting that (and I know many who have fought for same-sex marriage, etc.). If the best thing one could do were to mind one’s own business, perhaps one could be an effective altruist by not doing anything at all.

Perhaps the only sense in which there is some concrete content to criticize is in that, in asking people what they can do for others, effective altruists might subtly nudge them towards thinking they can do something. There are many situations in which that is arrogant. But it also has to sometimes be correct. For example, there are some who truly have no voice and must be spoken up for, such as non-human animals. The difficult part is knowing which situation is which.

Impact evaluation costs a lot (World Bank average: $500,000 per impact evaluation). Combined with the fact that results may vary from context to context and multiple studies may be needed to form a clear idea of what to do, this leads some to argue that impact evaluation should not be the main tool that is used (see, for instance, Pritchett et al.’s arguments here, or IPA’s “Goldilocks” initiative which seeks to find “appropriately-sized” evaluations for different policy needs).

My guess is that in the future we will see a lot more leveraging of big data sets, especially given the heterogeneity of results.

With that in mind, I thought to gather some large data sets that could help. Here are the top 6 types of data I found, as well as 2 cautionary tales. Am I missing any?

1. CDR data
Call detail records (CDR) are formed when people make phone calls or send SMS messages. These have been used to track people’s movements in disasters, to track migrant workers, or estimate when transportation infrastructure might need improvement.

2. Satellite data
The night lights data have famously been used to estimate growth. Satellites can also measure vegetation or, conversely, urban expansion, as well as having a number of other uses. Back in 2009 I wrote up a system to extract satellite data from NASA’s public-but-difficult-to-access database; Amazon has recently added the data to its own servers, making it much easier to access.

3. Apps
I am surprised that more people haven’t leveraged apps. ResearchKit, for example, allows people to get medical information from people who sign up with an Apple device. You have to rely on people who choose to share their own information, but apparently tens of thousands of people have already voluntarily signed up to fill out surveys and take coordination tests or share their daily activity. I am still looking for good health apps for a developing country context; let me know if you have any suggestions. I’ve toyed with the idea of making my own version of an app just to get the data that people transmit.

5. Social media data
My understanding is that it is illegal to scrape Facebook or LinkedIn. However, many companies will have an API from which one can legally obtain some of their data (here is a list of APIs). The rule of thumb more generally is that if it is not disallowed in a site’s robots.txt, it is okay, but there have been challenges to this. You can also legally get some data from Facebook if you start your own group, invite people to like it, and observe their interactions within your group.

6. Financial and other private sector data
Evaluations of microfinance programs have long benefitted from the fact that due to the nature of that type of program, data is collected on a regular basis. Other financial data are also typically produced on a frequent basis, and collaborations with companies can be very fruitful.

What didn’t work
Finally, David McKenzie has highlighted some data collection strategies that sounded promising but didn’t quite work, and it could be just as important to hear about them. One study attempted to measure inventory by photography; the other tried to use RFID technology to track inventory.